Krishna Consciousness and Interfaith go hand in hand in Arizona

Bhaktin Rev Dr Jannah Scott, Deputy Director, Center for Faith Based and Community Initiative, U S Department of Homeland Security, had come to have Darshan of Sri Sri Radha MadhavaHari Dham. She gladly posed for pictures and recognized Priest NaraHari das whom she had met before in a previous interfaith event organized by then Arizona Governor Janet Napolitano. Jannah Scott smelled blessed flowers and commented that the atmosphere in temple is very peaceful.

About three months ago, she had received Srila Prabhupada’s books from me in Washington DC. After reading, she developed a taste that she keeps it by her bedside gets inspired. I requested her to get rid of addiction to drinking coffee which she minimized from 21 cups a week to just two, and planning to give up altogether. Anne Taylor, Business Manager, AIFM joined in lively discussions- ”I enjoyed getting to see Jannah Scott, and shared with her that we are working to invite Michelle Obama to Phoenix in January 2010 for United we Serve – Golden Rule in Action Expo, in conjunction with the MLK Committee.  She already knew about it and agreed to take a packet of invitational letters back to Secretary Napolitano and to the National Interfaith Relations Office in D.C. for us”.

Next day, Jannah Scott’s birthday was celebrated and the Raja Bhoga lunch was attended by Scientology faith members Geoff and Sylvie Taft, and Richard Haworth who spent many hours to discuss Krishna Consciousness with several devotees at the Dham. Temple Trustee Prem Dhatri dd accepted a set of books for BhaktiVedanta Library’s interfaith extension.

There was another major interfaith event organized by Rev Dr Sally G Bingham, Founder and President Interfaith Power & Light. Opening remarks were made by Dev Jan Flaten, AEC , and Doug Bland, Organizer IFPL. Our Dr Ram Prasad read a verse from RigVeda. Highlight of the event was that all attended chanted MahaMantra with both hands raised, lead by Dr Prayag Narayan Misra, who also invited all to attend Diwali celebrations at the Hare Krishna Temple. 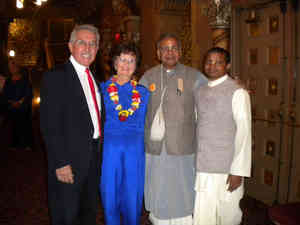 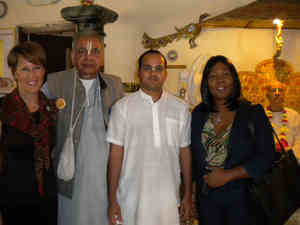 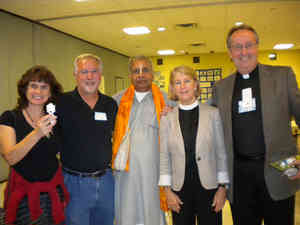 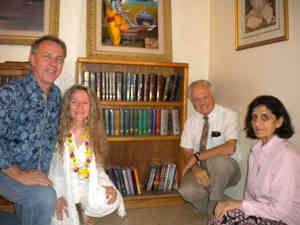